This article is about a plot with unit price on the vertical axis, and a quantity (dependent upon the unit price) on the horizontal axis.
View other price-quantity curves

The demand curve for a good is defined with the following in the background:

The demand curve has the following characteristics:

Note that the demand curve makes sense only ceteris paribus -- all other determinants of demand being kept constant.

The term demand is used for the entire price-quantity relationship depicted pictorially by the demand curve.

Two terms closely related to the demand curve are the demand function and demand schedule:

Individual demand curves are demand curves for a single economic actor. This actor could be an individual, a household, or a firm (where the firm may be a for-profit, a non-governmental non-profit, or a governmental agency).

Note that market demand (which is the aggregate across all economic actors of their demand for a particular good) is distinct from aggregate demand. Aggregate demand is a controversial macroeconomic notion that is part of Keynesian theory and roughly describes the total demand in the economy across all goods. Some schools of economics dispute whether the notion of aggregate demand makes sense even at a theoretical level, because demand for one good is expressed in relation to other goods. None of this discussion of demand curves touches upon aggregate demand.

A lot of interesting and quirky phenomena may be obtained at the level of individual demand curves but may become less visible (due to smoothing and averaging out) at the aggregate level because of the canceling out or smoothing out effects. Some examples are discussed below:

This gives some mathematical possibilities for the demand curve. The list is illustrative and not intended to be exhaustive. 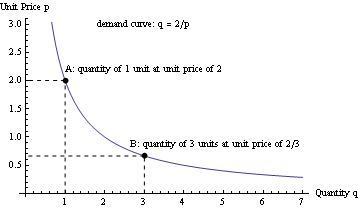 Here, the individual or household spends a fixed amount of money on the commodity regardless of its price. Thus, the quantity purchased is inversely proportional to the unit price, i.e., the demand curve equation is given by:

is the total budget amount that the household spends. Here are some properties of such a demand curve:

A slight variant of the above is:

is the transaction cost (which we assume as a cost per unit quantity purchased). This variant avoids the problem of infinities at one end: as the price falls to

. In particular, for small transaction costs, this quantity demanded is extremely high.

if nothing is purchased. If we denote these two transaction costs as

Yet another variant is where there is a minimum quantity that can be demanded if any nonzero quantity is demanded, which we call

, we replace it by 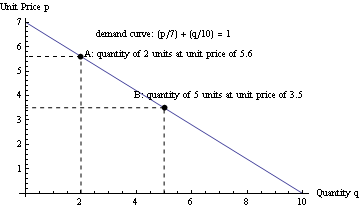 Here, the demand curve is a straight line and is given by an equation of the form:

is the quantity purchased at zero price and

. Some features of this demand curve are:

Demand curve with a region of high price elasticity in between 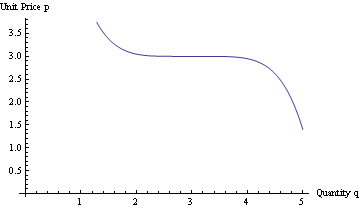 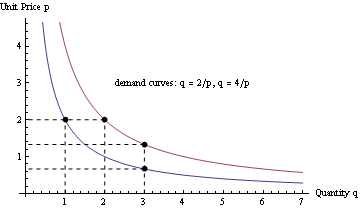 The picture given above shows two different demand curves for the same good. A change in some exogenous parameter that is one of the determinants of demand may lead to an expansion from the inner (blue) demand curve to the outer (purple) demand curve.

The slope (or rate of change) of the demand curve is inversely related of what is termed the price-elasticity of demand. The price-elasticity measures the total change in quantity demanded per unit change in price, made dimensionless by dividing by the quantity-price ratio. In other words, at a price

, the price-elasticity of demand is:

The slope in mathematical jargon would be:

There is no general principle that uniformly predicts the sign of the second derivative; similarly, there is no overarching rule about whether the price-elasticity of demand rises or falls with price.

In this model of some critical price ranges, the sign of the second derivative is not constant.

In general, the behavior of the second derivative depends on the following:

The demand curve is difficult to estimate because at any given point in time, we can only get one (quantity, price) pair for the market as a whole. There are, however, ways around this problem that allow us to make a rough sketch of the demand curve.

For some goods, a sales tax is levied on the good, usually either a fixed amount per unit of the good sold, or as a fixed proportion of the pre-tax price. In case of a sales tax, there are two possible conventions used when drawing the demand curve:

Movement along the curve

In a free market, suppliers are expected to vary their price until demand equals supply. In other words, demand moves along the demand curve until the price reaches the market price.

Movement (shifts) of the curve

The demand curve changes when one (or more) of the determinants of demand other than price changes.

Outward shift of the demand curve

Inward shift of the demand curve

Other shape changes of the demand curve