A price ceiling that is set above the market price of the good has no direct short-run effect. 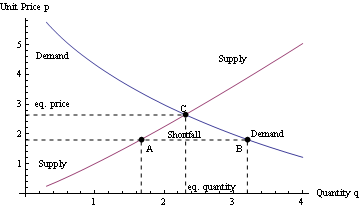 The key problem that needs to be solved in case of a binding price ceiling is the problem: given that the quantity supplied is less than the quantity demanded, who among the different potential buyers of the good gets how much of it? There are two broad categories of approaches:

A key idea to keep in mind when thinking about these policies (queueing, rationing, and queue-rationing) is that the policies are determined mainly by sellers, but sellers do not internalize most of the gains from selecting policies that improve the efficiency of allocation between buyers. Sellers may, however, gain indirectly through reputational benefits, or spillover benefits to other goods the seller is selling.

Under most sets of assumptions (in particular, assuming that there are no external costs or external benefits), price ceilings have a negative effect on economic surplus in competitive markets. In general, the following are true:

Note that there are three components to the deadweight loss arising due to a binding price ceiling:

When the price ceiling is set to below the optimal price, the non-price competition mechanisms are similar to those in a competitive market, namely:

One difference is that since the monopolist has complete control over the supply of the market, it may be easier for the monopolist to choose the non-price competition strategy more freely.

The long-run impact of a price ceiling is a much more complicated matter than the short-run impact. There are, roughly speaking, three sources of complication:

The type of impact a price ceiling has also depends on its structure. The analysis can differ quite a bit between uniform fixed price ceilings, price change ceilings, and profit ceilings. However, we can say a few broad things.

The situation is a little different in a monopolistic firm, but the underlying trade-off remains the same: the firm can optimize better in the long run, but it can also choose to exit altogether.

Generally, price ceilings reduce seller incentives to prepare for demand and supply shocks, but the story is a little more complicated

A price ceiling that is non-binding now could become binding in the face of a demand shock or supply shock that increases market prices, especially in the short run when firms cannot reconfigure their factors of production.

Comparing these two, we see that the price ceiling prevents the firm from capturing all the gains in market price. Therefore, even if the firm does increase its production, it will increase it to a lower level (enough for the price ceiling of 2) rather than to the higher level (enough for the market price of 3). Thus, although the firm's long-run planning will alleviate the shortfall a little bit compared to not being prepared at all, the shortfall is still not going to be eliminated.

The above assumes that the firm has definite knowledge of the demand shock. However, the situation gets more complicated when the demand shock is more probabilistic. For instance, suppose the firm believes that there is some probability that a demand shock will cause the market price to rise to 3. The firm has to choose to reconfigure its fixed costs to gear toward producing enough for the market price of 3, or stay with its current setup, or anything in between. Whatever choice the firm makes, it will have to compare the expected gain from that choice of both the options.

Even in this more complicated situation, the presence of the price ceiling reduces, overall, the extent to which the firm will increase its production, by reducing the upside. However, the specifics will depend on other questions such as whether the firm's production cycle, as well as its buyers, can engage in intertemporal substitution.

Note that this analysis is contingent on some assumptions:

For goods where present purchases can substitute for future purchases, buyers respond to expectations of future price increases by buying more now. In markets with price ceilings that may become binding, buyers have to factor in not just the future market prices but also future availability. This can change the buyers' decision of how much to buy now, but it's ambiguous in what direction the buyers' behavior will change. Specifically, the way the buyers' behavior changes depends partly on how much each buyer perceives as the costs of non-price competition and how much the buyer's individual reservation price compared with the market price.

This ambiguity is related to the idea that the effect of price ceilings on consumer surplus is ambiguous (though it's definitely negative for producer surplus and overall economic surplus).

Note that the possibility of black markets does increase the incentive to buy and hoard.