This is the development of a special case of determination of quantity supplied by firm in perfectly competitive market in the short run. The notation builds on notation used in that page.

Recall of assumptions and setup

We do not recall all the definitions, but we do recall the key assumptions: 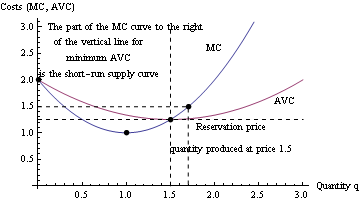 , it is vertical with quantity coordinate