A minimum wage is a legally enforceable government-imposed lower bound on the wage that can be paid to a worker. It thus acts as a price floor in the labor market.

Basic structure of the minimum wage

Minimum wages are usually specified for work per unit time. For instance, a minimum wage might be imposed of $5 per hour worked.

Formally established minimum wages involve the government directly regulating labor arrangements to prevent employers from paying workers less than the minimum wage rate. There also exist some agreements between labor unions and businesses creating a minimum pay rate, but this can have some differences from the minimum wages we describe in this article.

The effects of minimum wages can be analyzed by considering them as price floors on the sale of labor. However, the effects can vary depending on the assumptions in the model, particularly regarding assumptions concerning the degree of market power. Whether a labor market is perfectly competitive or monopsonistic affects the analysis present. (In the analysis below, we assume that the labor market is perfectly competitive.) This analysis also is done in partial equilibrium.

In a perfectly competitive market, the effect on the equilibrium quantity traded is either zero or negative. In the case of a minimum wage which is below the market wage for the market is applied to, the analysis is essentially that of a non-binding price floor, and we expect that there will be no effect on either the wage paid or the quantity of labor bought. 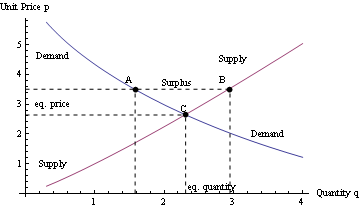 (Note: in the image linked above, the label "Surplus" refers to the excess supply of the good in question, not the social surplus. The deadweight loss is represented by the quasi-triangular area between the demand and supply curves between the new quantity sold and the old quantity sold.)

Effects on the distribution of social surplus

As described in the previous section, the effects of a binding minimum wage on total social surplus are negative. However, the minimum wage also redistributes some of the remaining social surplus in the labor market. Consumer surplus decreases, as employers have to pay a higher wage for labor (and choose, as a whole, to buy less labor). However, the effect on producer surplus is indeterminate, as workers (as a whole) can no longer sell as many units of labor, but do receive a higher wage for the units they do sell. If the demand for labor is sufficiently inelastic, producer surplus could increase.

An intuitive way of thinking about the latter statement is as follows: if employers are very sensitive to a new minimum wage (or an increase in an existing one), there will be a large cutback in hours or employees, and while remaining workers will be paid a higher wage for the hours they work, employees' total income (and producer surplus) falls. But if employers barely react to a minimum wage increase, there will be little or no cutback in hours or employees, and workers will receive a higher wage.

Effects of minimum wages in a monopsonistic labor market

As with the perfectly competitive case, the effects of minimum wages can be analyzed by considering them as price floors on the sale of labor. However, in this case, we are concerned with the effects of a minimum wage when there is a monopsony in the labor market; that is, when there is only one buyer of a certain type of labor. We also assume that the workers in this market compete with each other, and do not collaborate together (such as via a labor union) to gain market power.

Here, the effects of a binding minimum wage mirror what we would expect from other cases of monopsony. Namely:

Also, in the case of a binding minimum wage set at the wage which would exist in perfect competition, the minimum wage will eliminate the deadweight loss associated with the monopsony.