The term price gouging is a morally loaded term without a precise meaning, but it typically refers to a seller sharply and significantly increasing prices for a good in the short term in anticipation of, or in response to, a substantial short-run increase in demand (i.e., an outward shift of the demand curve), typically due to an emergency, without (or disproportionate to) an increase in the cost of production. 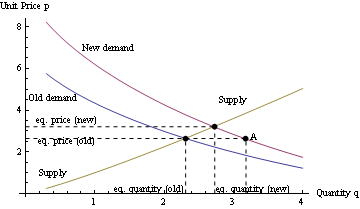 In the short run, a dramatic outward shift of the demand curve can lead to a significant increase in the market price, because the short-run supply curve is highly price-inelastic. Over the longer run, the same expansion of demand may lead to a much smaller price increase, because the long-run supply curve is less steep (more price-elastic) because fixed costs can be reconfigured in the longer run leading to more flexibility.

As the expansion of demand curve picture makes clear, an expansion of the demand curve leads to a shortfall, where the quantity demanded exceeds the quantity supplied. This shortfall typically leads to some form of non-price competition (such as queueing) where buyers compete with each other to acquire the good, expending valuable resources that are not captured as gains by anybody, and where the good may not ultimately be acquired by the buyer who values it most. By raising the price, sellers avert shortfall in two ways:

A POWER BLACKOUT EXAMPLE: [SHOW MORE]
Suppose a natural disaster strikes, causing a mass electricity blackout. Some people already own flashlights and candles but are thinking of getting some extra ones just in case the blackout lasts longer than anticipated. Some people don't own them but don't have any urgent work to do and are willing to sleep through the power blackout. Some people have urgent work to do and are desperate for some form of illumination. A seller who has a limited stock of flashlights and candles raises the price and hence induces each buyer to think twice before buying. As a result, those who already own flashlights and candles, or those who don't have urgent work, may choose to wait. Those who need them urgently may also choose to buy less than they otherwise would, making sure that everybody gets a few.

The main flip side

The flip side, or ignored aspect, of this rationale, lies with the wealth effect -- some people may be truly desperate for the good, but may be too poor or may lack the immediate cash to purchase it. Although wealth effects are operational in a number of situation, unanticipated emergencies are a particularly strong case.

It is, however, perhaps even more likely that in the absence of sellers increasing their prices, these poor or cash-strapped people would be unable to purchase the good, given that a general scarcity is more likely.