A sales tax is a tax imposed by a government on final sales or purchases.

A sales tax is a kind of consumption tax, and it differs from a value-added tax in that the tax is collected only at the point of final purchase rather than at intermediate steps on the value added at each step.

A sales tax may be of either of these two forms:

Burden of remitting the tax

In most jurisdictions that impose sales taxes, the responsibility for computing and collecting the sales tax, as well as remitting the amount to the taxing authority, falls on the seller. Failure to do so may lead to trouble for the seller, not for the buyer.

Note that unlike the income tax, the sales tax is computed as a percentage of the pre-tax revenue and added to the pre-tax revenue to determine how much the buyer will pay. Taxes computed this way are called "exclusive taxes", i.e.., the taxable quantity does not itself include the tax amount.

For instance, for a sales tax of 25%, the post-tax price is

times the pre-tax price, which is

The explicit formula is this. In fractional term, if the sales tax fraction of pre-tax price is

, the fraction of post-tax price is:

Inclusion or exclusion of sales tax from marked price

Conventions on whether the marked prices for items are quoted inclusively or exclusively of sales tax vary from place to place. As a general rule, vending machines and other fixed-price self-serve sales machines typically quote prices inclusive of sales tax, regardless of whether the sales tax is computed inclusively or exclusively. This is largely to make payment simpler. Similarly, shops, markets, and restaurants that are selling a few specific items in bulk may quote the prices inclusive of sales tax to avoid the overhead of sales tax computation associated with each item and make the process easier and faster for buyers and sellers.

However, many shops and markets quote a list price that does not include sales tax, and they generally compute the sales tax at the end, as a percentage of the overall bill, at the time of checkout or bill payment. This may be for a number of reasons:

For instance, consider this example:

In this case, the first three sales are not subject to sales tax, but the fourth sale is.

If, instead, each of the sales had been subject to a sales tax, then we could encounter a situation of double taxation: the earlier sales would end up getting taxed repeatedly, both directly and indirectly through the later sales.

Generally, the decision on whether to levy sales tax is made by the business rather than the consumer, In case the business is not levying sales tax, a proof may be needed from the consumer that the good or service being purchased will be resold or used as an input to another production process.

This sales tax is in addition to any taxes that the seller would need to pay if the items were sold at a profit (a higher price than the purchase price); taxes on such profits would be paid as income tax.

Sales taxes on used goods can result in double taxation.

Additive nature of sales tax and relation with market size

For a revenue-proportional sales tax, the relation between market structure and tax revenue is more complicated. In particular, in a competitive market:

The effect of a sales tax is understood to mean the effect of introducing the sales tax on a good where there was none before. The analysis of such effects is an example of comparative statics.

Consider the simplifying assumptions of a competitive market, and assume that the sales tax is levied only on a particular good and not on the various substitute goods and complementary goods. Also, we assume that the law of demand and law of supply hold (these assumptions are usually valid in the short run). Under these assumptions, the following are the effects of introducing or increasing a sales tax:

Effect on economic surplus and its distribution

Once a sales tax is introduced, there are generally two important effects: 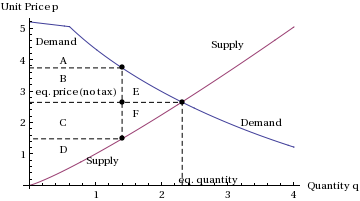 Here are some of the relationships:

Note that this analysis includes government surplus in the economic surplus. The bad effect of taxation, as per this analysis, is the deadweight loss represented by the Harberger triangle.

The tax incidence question is: how is the burden of taxation (both in terms of the part captured through government surplus and the deadweight loss) distributed between producers and consumers? The answer depends on the relative price-elasticities of the demand and supply curves.

In other words, raising taxes has clear negative effects on everything except the government surplus (the tax revenue collected), where the effect is ambiguous.